This is the fifth post in a series on frustration. View them all here.

Quick survey. We first talked about outward only frustration, to only care about appearances, with us all lifting a fashionable fist while sitting on the couch. So maybe the answer is a frustration that’s inward only? But when we looked at that we found that form will only lead to childish foot stomping—not getting our way. In both of these takes on frustration, they appear very immature.

We ended the previous post with the verse from 2 Timothy 2:2, “flee youthful passions and pursue righteousness, faith, love, and peace, along with those who call on the Lord from a pure heart.” Fashionable fists and childish foot stomping are both easily categorized as “youthful passions.”

Some circles identify with a movement called “young, restless and reformed.” From my experience, there’s much youthful passion in the “restless” aspect of this movement. So how are we delivered from our restlessness, our youthful passions? Is there a way out other than these lacking forms of frustration?

Jesus: Right desires applied rightly
We have to look to Jesus because we clearly aren’t capable on our own. If we believe that Jesus is perfect and we know that he was frustrated (driving people out of the temple with a whip is one example among many), that means it’s possible for us to flourish in our frustration. Jesus gives us the key to flourishing in our frustration: right desires applied rightly. Here’s another chart to help: 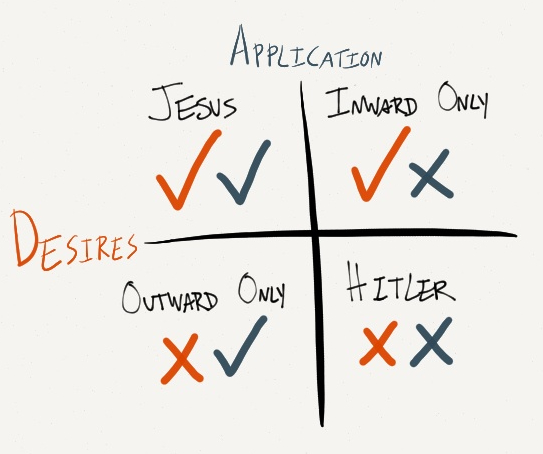 There are two aspects to how Jesus was frustrated. Right desires. Applied rightly. It’s easy to get one, but getting both is hard. Jesus’ desire was always for His Father. In John 4:34 he says, ““My food is to do the will of him who sent me and to accomplish his work.” His food. This is what kept Jesus going, what fueled his doing: the will of the Father and to accomplish His Father’s work. The work of the cross was ever before him. This is his right desire.

How did he accomplish this work? By dominating those around him? By being harsh? By slapping around the disciples? No, he accomplished his work through submission. Through patience and gentleness. Of course this doesn’t mean a sissy Jesus, he was strong (probably our definitions of strength are what’s lacking if we see Christ as anything less). He stood up to the established religious order, cared for the disenfranchised and shared his life with those closest to him. This is a right application of his right desire.

Talk is cheap
Jesus confronts the outward-only types through a parable in Matthew 21:28–32. Talking to the religious leaders, he tells a story:

“What do you think? A man had two sons. And he went to the first and said, ‘Son, go and work in the vineyard today.’ And he answered, ‘I will not,’ but afterward he changed his mind and went. And he went to the other son and said the same. And he answered, ‘I go, sir,’ but did not go. Which of the two did the will of his father?” They said, “The first.” Jesus said to them, “Truly, I say to you, the tax collectors and the prostitutes go into the kingdom of God before you.”

Talk is cheap. It’s easy to buy but real follow through is expensive and rare. The fashionable fists are all lowered just a bit after hearing that merely moving your mouth is not good enough. To do the will of our Father, we must get out into the fields.

Submission is necessary
Jesus confronts the inward-only types through his own example in the garden of Gethsemane. Before his crucifixion, he goes to the Father and prays for the possibility of not having to endure the cross. He doesn’t demand it and stomp his feet. He brings his request and his fears to our Father but ends his prayer in a very important way: “not my will, but yours.” Jesus, the second Person of the Trinity is submitting his own will to the Father. What unbelievable trust in God’s goodness! What faith in God’s provision! What lack of ego in the one Person who could have claimed one. Submission is necessary, sometimes pain, sometimes even death.

Jesus tells us how to be frustrated: right desires applied rightly. If this model seems impossible, welcome to humanity! It is impossible to be perfect, but this is where we continue to look to Jesus.

The work that was Christ’s food in John 4 is our means of being able to flourish in frustration. Christ’s death and resurrection is how we can have right desires and apply them rightly. His death becomes our death: death to selfishness, laziness, lack of submission, self-righteousness and the lot. His resurrection becomes our resurrection, able to walk in new life and actually live this out. Until the new heavens and earth out resurrection won’t see complete fulfillment, so we won’t be perfect, but even in our imperfections we can come to the One who delivers us from our false forms of frustration. Matthew 11:28: “Come to me, all who labor and are heavy laden, and I will give you rest.”

Next post will be the last in our series on frustration: completing the excursion to holy longing.

One thought on “Frustration: The Frustrated Jesus”