For years, I liked the idea of getting a tattoo, but not knowing exactly what I would want on my body for the rest of my life, it stayed in the idea phase for a while. I found it fascinating to put something on you so important that you’d want it there forever. But my idea phase ended when I landed on something specific in my mind. Then about a year ago, I met a friend who was a tattoo artist and now owns his own shop. I talked to him about this idea, and eventually it was go time. I made a consultation appointment. I wanted the artists Georges Rouault and Jeremy Lewis to collaborate, using my arm as the canvas. 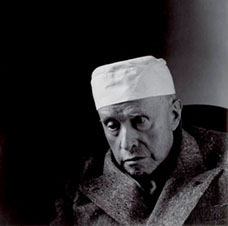 Rouault was a French painter and printmaker, died in 1958 and his work influenced the expressionist movement (see the anemic Wikipedia entry here). He’s more influential than he is popular, and really ought to be more popular, in my opinion. The great Reggie Kidd introduced me to his work during my seminary years. He was influenced by medieval artists, respecting their lack of celebrity status, taken with their fusion of belief and art (without cynicism or irony), and fond of their imagery. If you are interested in knowing more about him (and you should be!), this book is helpful: Rouault: A Vision of Suffering and Salvation

Jeremy Lewis is a friend of ours, and has been working as a tattoo artist for a number of years (check his Instagram account). He also is one of the owners of Sickle and Moon, a shop in Columbia, SC. He’s part of our community at our church, and we enjoy hanging out with him and his family. I’ve admired his work and thought he could set Rouault in an interesting way, one that understood the tone and transferred well to the medium of ink and skin. 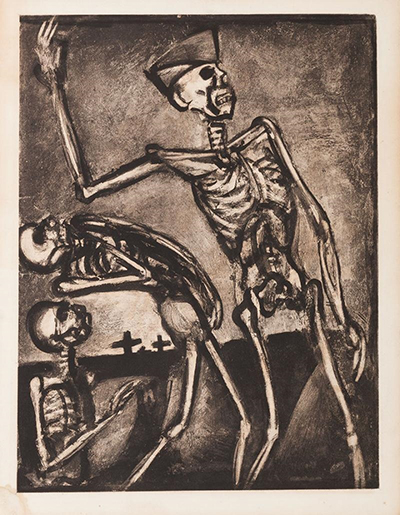 Most of Rouault’s work has fascinated me, but his Miserere series has always stood out (view the flickr gallery here). Miserere is a series of etchings about the passion of Christ. Each has a caption below them. My particular favorite of the series has always been “debout Les Morts!”, translated from the French: “Arise, you dead!” As you can see from the image to the right, you have skeletons in different stages of life, with the three crosses at Calvary behind.

When Christ was crucified, there were reports of dead bodies coming back to life:

“The tombs also were opened. And many bodies of the saints who had fallen asleep were raised, and coming out of the tombs after his resurrection they went into the holy city and appeared to many.”
(Matthew 27:52–53)

It also references Ezekiel’s vision of the valley of dry bones (read the story here), where dead bones start rattling and come to life.

In both of these stories, we see a reversal of death. Bones and skeletons are a symbol of death, as is the cross. But now, death has been put to death through the death of Christ. That which was dead is now coming back to life. So we see the first skeleton in a prayer-like pose, the second becoming enlivened and the third, in a flourish, now walking.

These stories and this etching all point to the day where one day there will be no death. Christ’s death is only important to those who believe if there is a resurrection…a real resurrection with new bodies and hearts, new people and a new world. In the darkness of death we find the light of the new world creeping in.

The etching and my tattoo: Georges Rouault and Jeremy Lewis

So why put this image on my body’s canvas, my inner arm? There are plenty of wonderful images to use, why choose this one as my collaboration? The image is more than an empty hope. It will be true. My flesh will be re-made and re-worked. The hope of my new body, etched by Rouault and inked onto a canvas, is etched with ink on my body today. The image on my flesh now will become true of my flesh in the future.

This is the hope I get to be a part of:

“Jesus said to her, “I am the resurrection and the life. Whoever believes in me, though he die, yet shall he live,and everyone who lives and believes in me shall never die.”
(John 11:25–26)

Though I will die, death is not the end.

There are may kinds of deaths we experience in this life. Death has its hand in everything. Though this world is broken, we can have a hope that is rooted in something real. Broken promises, fragmented selves, disintegrated relationships…all of these will be restored one day. God took on our flesh, took our life and gave up his own. Even now, parts of his resurrection break through, but one day all will be made new.

Though I will die, death is not the end.