What is it like to not have a home for a year?

We have moved around 15 times since September. With a toddler. Add that last part and what could sound kinda fun sounds like quite the opposite. There have been fun and enjoyable parts, but they have been the exception to what has been a chaotic, stressful, and generally depressing year for me.

We are Americans living long term in England, planting a church. We needed to leave England temporarily as we were applying for new visas. This past September we moved to America for what we thought would be nine weeks. When all is said and done, it will have been over a year. We still have a house in England that pay rent on, all our stuff is there, our car, our friends, our church, and my job. When I packed I only brought a few clothes with me, I thought it was going to be a short trip! 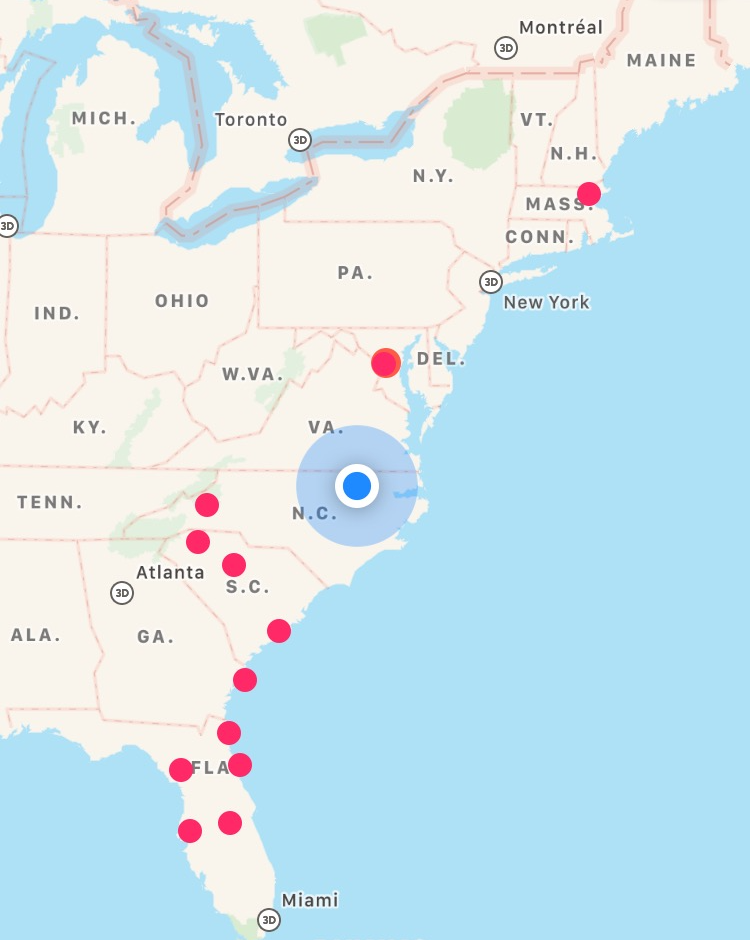 A few of the places we’ve lived since September.

Now as far as the history of displaced people go, we’ve easily had it the best that anyone has ever had it in the history of the world ever. We aren’t fleeing because of war or threats, we have churches that love us, friends that take us in, we aren’t lacking in resources like money (though it is crazy expensive to not have a home!). We’ve been cared for. People have asked how we’re doing and have given us real help. All of this caveat isn’t to say that it’s been easy, but it does put it into perspective. The typical experience of someone who cannot get to their home is far more dramatic. We’re thankful that we’ve been cared for and that we have a support network.

Not having a home means living out of a suitcase. It means travelling with minimal stuff because you can only fit so much into a small rental car. It means having to buy all the grocery basics over and over again. Because we’ve been living in England, we used the NHS for anything health related. Being in America we’ve had to buy short term health insurance a few times over. Thankfully we haven’t been seriously ill, otherwise it would be quite expensive for us. It means kind of imposing yourself on others at times to take you in. We’ve had to buy clothes that we know we have in our house in England, but don’t have access to. It means our two year old son saying, “I want to go home,” but really just referring to where we’ve left last. It means being very needy and not having very much to give.

There have also been surprises, though. Being in America longer has allowed us to see family more than we would have. We have connected with more churches in more meaningful ways. Moving 15 or so times is hard, but that also means 15 or so people have taken us in. That’s not the easiest thing to sign up for! Even though it’s hard living as a needy person, the other side is that people have been very generous to us with their space, their time, their money, and their prayers.

There are a few larger areas where I’ve been challenged this year. The biggest one has been not having a real community of people that I’m consistently around. I’m also in a somewhat unique position in life that others sometimes don’t easily identify with. I’m lonely most of the time. Thankfully there have been a few people who have been great friends to me, but in general, this kind of life means loneliness.

My plans have been challenged. I am generally an ambitious person; I love to work, especially when it’s something I really believe in. But being back in America, we’ve struggled with answering the question of “What’s our purpose here?” Surely it’s more than waiting to go back and surely it’s more than just raising awareness for Redeemer, right? We don’t know the answer to this one, maybe there isn’t one. Combining loneliness and lack of purpose is a powerful agent of despondency. I can easily stay there if it not for my faith.

My faith, however, has also been challenged. Do I trust God? Or does God have to give me immediate reasons to make it easy for me to trust Him? Those are two very different things. Isn’t faith the belief that God has our best in mind even when we don’t feel it? At times I’ve doubted that God is actually good, or at least that He’s good to us.

But here’s the real question this post (and our living situation) is getting at: How does my faith allow me to live in this kind of environment? Empty religion would be of some help, it would help me cope. As would a myriad of other things, like counselling, hanging out with friends, doing fun things as a family…these can all be good things. But by themselves, they allow us to merely cope with it all. I want to do more than just cope with life.

Jesus intentionally left his home, being in perfect community with the Father and the Spirit. And on earth his family had to leave their home. Jesus is a refugee. Later in life, He was generally a wanderer and alone. He was constantly misunderstood and ridiculed. He wasn’t taken seriously but was taken for granted. Knowing this He still chose to come. The Object of Faith came to the faithless, and gave them the gift of belief.

And what did Jesus get for this cosmic immigration? He got to be publicly tortured to death while those closest to Him abandoned to Him. More than that, He bore the brokenness of the world upon Himself. That’s not something I pretend to completely understand.

Why would Jesus do this? The Bible says He did this because there was a joy greater than His suffering: us. So now those who are homeless look up to the One who deliberately left His home for our good, knowing full well what awaited Him in ours. Those who experience chaos look up to the One who endured the chaos of the cross. He takes up our chaos upon Himself.

Jesus received death for coming to our world, but He also obtained a people. His people aren’t defined merely by death anymore though, they get to be defined by Jesus’ new life, His resurrection. Jesus’ resurrection brings hope to us, a hope that was once out of reach. He brings us in to His world, where all things are being renewed. This is the hope He gives to His people.

Those who are looking for a home now realise that home isn’t a place, it’s a Person. This Person has promised that He’s always with us and will never abandon us. That’s a home that can’t be denied, no matter our living situation.

When I think about Jesus, in the way that Bible teaches, I realise that He is good. More than that, He is good to me. In ways that supersede, but also include, our current chaos. He is in the boat, with me, telling the storms to be calm. I am just another hungry person in the crowd following Him, and He turns a boy’s inadequate lunch into something that feeds us all. Though I’ve abandoned Him many times, He has never abandoned me. More than that, He gives me the gift of a new hope that He won. It stops me from obsessing with the problems in this world, but also renews me to re-engage this world and its problems with supernatural power.

This may not always feel true or feel real, but it is true and it is real. And it’s precisely when we don’t feel it that our faith comes in to inform us what is real and true.

So come what may: home or no home, lonely or known, with money or penniless, in success or failure, Jesus is always at the centre, calling me to follow Him in all of life. This is how I can survive living without a home. Jesus is good to me and always will be.

2 thoughts on “Homeless for a Year”